The model consist of 3 major compartment or network area namely the ENTERPRISE NETWORK, the PROCESS NETWORK,  and the CONTROL NETWORK.

1.Consist of Master Terminal Unit, HMIs and the Database Historian.

2.Provides an interface where the operator administers control and supervisory actions on all other subcomponents and field devices for efficient operation of the SCADA system.

1.Comprises the field instrumentation devices such as the Remote Telemetry Unit (RTU), the Sensors/IEDs and Actuators.

2.Modern SCADA incorporates an Intelligent Electronic Device (IED) which is an intelligent sensor and capable of functioning in place of the Programmable Logic Controller (PLC)

As with the MTU the HMI are also affected with security issues resulting from outdated operating system, software and antivirus program. Some possible threats resulting from these issues are:

1.Input Validation Vulnerability: Arising as a result of improper validation of input variable causing the software to write more data than it can normally hold.

2.System Level Access: When the HMI default access level is system it could pose a security challenge as an attacker who succeeds in compromising the HMI will not face difficulty in taking control of its entire functionality to cause havoc.

RTU is notable for several security issues such as:

1.Packet Modification: RTU packet in transit can be captured and modified since the protocol used within the field devices lacks proper encryption mechanism hence the messages are in plain text.

2.Buffer Overflow: Memory allocation on field devices such as RTU are usually fixed, hence knowledgeable attackers can take advantage of this to cause a denial of service.

3.Replay Attack: RTUs can be the route to stage a replay attack. Replay attack occurs when a captured message is retransmitted at some other time.

4.Privilege Escalation: An attacker who has successfully penetrated the control network via MiTM attack can increase his access level by exploiting privilege escalation vulnerability, should the RTU in use be susceptible to such vulnerability. An attacker exploiting this vulnerability can cause confidentiality, integrity and availability issues for the concerned system.

The two most common protocol used in SCADA network is Modbus and DNP3. While Modbus is proprietary, Distributed Network Protocol (DNP3) is non-vendor specific. These two protocols have common security issues such as lack of Cryptography.

A compliance with MITRE ATT&CK Framework and Cyber Threat Metrics

These represent the starting point or point of compromise with which an adversary use to gain initial foothold within the target’s network. With respect to this work we have identified and used six possible attack vectors to compromise the SCADA master terminal unit from the documentation of MITRE ATT&CK framework and Cyber Threat Metrics, namely: removable media, malicious web components (SQL, XSS, BOF), Drive-by Compromise and Spear Phishing Attachment.

This form of attack vector is mostly used in networks that are not easily reachable or accessible, also known as AIR-GAPPED NETWORKS e.g. SCADA and DCS network. The malware is copied into the removable media e.g. USB stick, thumb drive etc, and inserted into the target system mostly by disgruntled employee who has physical access to the system.

This form of compromise involves a more targeted approach in which an adversary gains access to the target network by way of MALICIOUS EMAIL ATTACHMENT. It is a form of social engineering technique that uses a well constructed target-specific email to deliver the malware.

This method of malware infection takes advantage of a USER VISITING A WEBSITE in the process of browsing. This form of exploitation is mostly effective as once successful it gives the adversary access to the internal network systems. An adversary delivers the exploit code by injecting malicious code on a rather legitimate website. Cross-site scripting and watering hole attack are methods used. Other ways are through malicious adware and spywares served through legitimate websites.

This can be a tool for an attack to be propagated by using web pages that has been compromised with malware. An individual visiting such COMPROMISED WEBPAGE can also possibly expose his system or network to such vulnerability and in the process inadvertently download the malware. SQL injection, Buffer Overflow attack and Cross-site scripting attack are possible for webpages that are not properly secured or code not properly written and tested for bugs.

Stuxnet has three modules: a WORM that executes all routines related to the main payload of the attack; a LINK FILE that automatically executes the propagated copies of the worm; and a ROOTKIT component responsible for hiding all malicious files and processes, to prevent detection of Stuxnet.

It is typically introduced to the target environment via an INFECTED USB FLASH DRIVE. The worm then propagates across the network, scanning for Siemens Step7 software on computers controlling a PLC.  In the absence of either criterion, Stuxnet becomes dormant inside the computer. If both the conditions are fulfilled, Stuxnet introduces the infected rootkit onto the PLC and Step7 software, modifying the code and giving unexpected commands to the PLC while returning a loop of normal operation system values back to the users.

For its targets, Stuxnet contains, among other things, code for  MAN-IN-THE-MIDDLE ATTACK that fakes industrial process control sensor signals so an infected system does not shut down due to detected abnormal behaviour. 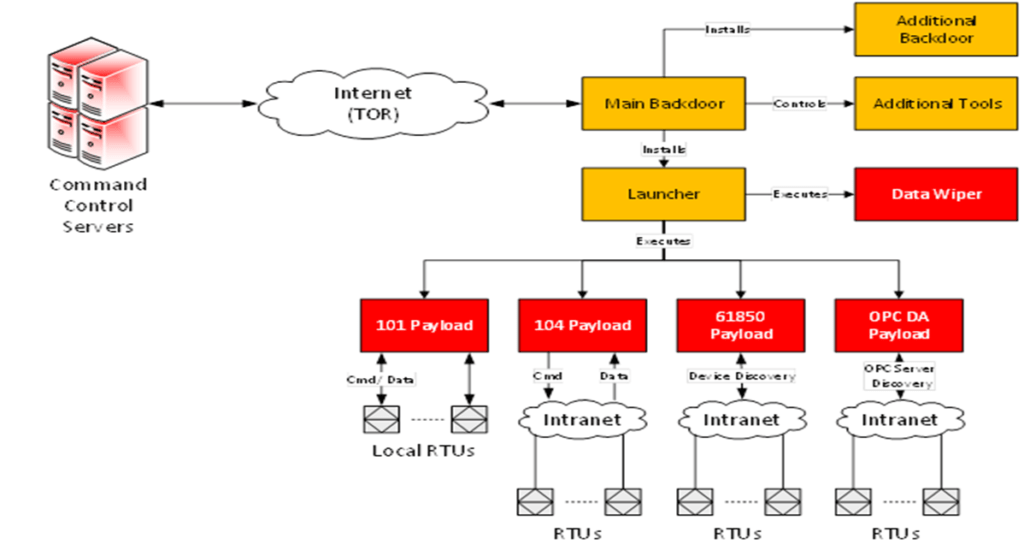 Industroyer (also referred to as Crashoverride) is a malware framework considered to have been used in the cyberattack on UKRAINE’S POWER GRID on December 17, 2016. Industroyer is the first ever known malware specifically designed to attack electrical grids. At the same time, it is the fourth malware publicly revealed to target industrial control systems, after Stuxnet, Havex, and BlackEnergy. Industroyer can use a specialized exploit to launch a DoS attack on the Siemens SIPROTEC devices widely used in electro-energetics. By exploiting a known vulnerability (CVE-2015-5374) the malware can place the device into “firmware update” mode. 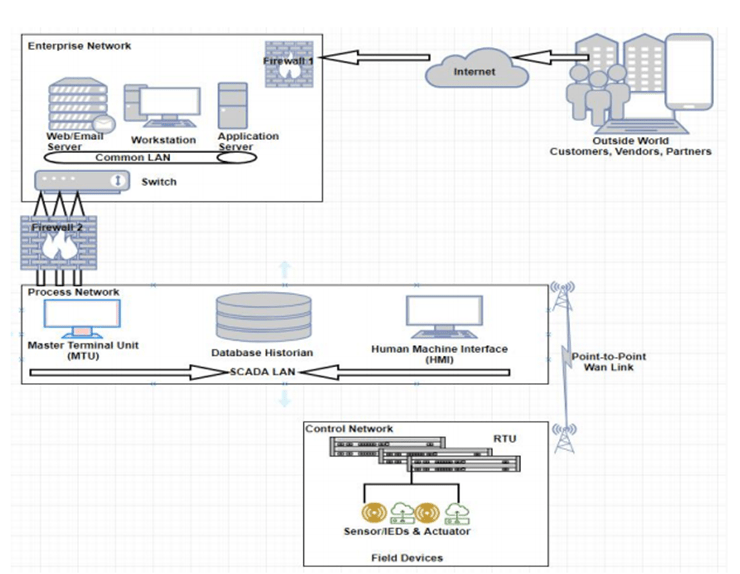 We have been able to come up with 2 different attack scenarios. The ultimate goal of our attack in each of the model is to compromise the integrity of data of a SCADA MASTER TERMINAL UNIT. The MTU as explained previously is where the ultimate control decision is made and translated in the form of a command which is transmitted over the communication link and effected on the respective field devices. The effect of an MTU integrity-based compromise is far reaching and can result in physical damage.

We define integrity-based compromise as any attempt perpetrated by an attacker to circumvent the authority of the operator of the SCADA MTU gaining full control of the component and issuing out malicious instructions, or a deceptive action by a malicious agent geared towards luring the operator of the SCADA MTU to perform and issue out wrong commands in response to a false alarm. 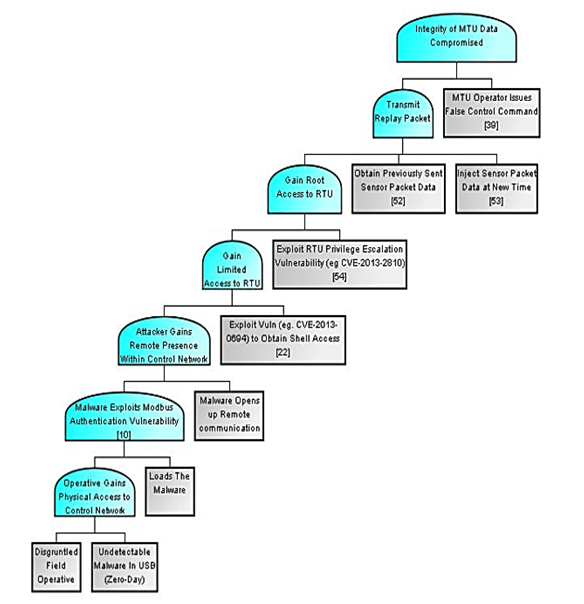 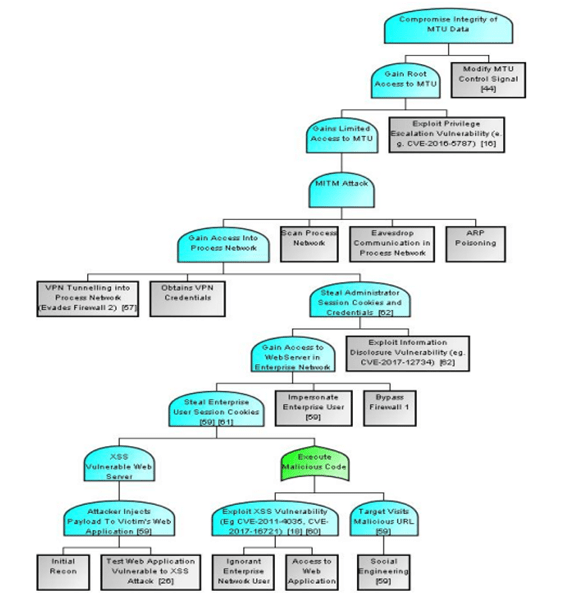 The SCADA Network sees it’s most of weaknesses at the Enterprise Level which is highly dependent upon human interaction. It is, however always recommended to train the human resources. Training empowers employees with an up-to-date know-how on how to recognize and mitigate a cyber-threat. By making employees able to identify and eliminate cyber threats, we are strengthening the most vulnerable link in the chain. Anonymity CSL provides comprehensive Training Programmes especially designed for SCADA Workforce to minimize the risk of Human Err.

OUR APPROACH AND METHODOLOGY

The METHODOLOGY ANONYMITY CSL takes up are distributed in 6 stages–

Here are the tools that we recommend in a SCADA assessment –

Outstanding and inexplicable services were received by us as a Stellar from GIS consulting team for the ISO 27001 implementation and Cybersecurity. It would,indeed, have become a major hurdle for us to obtain this most desired certification if we hadn’t got accompanied by this incredible consultancy team of professionals. To be honest, the team members present in GIS consulting team are extremely high knowledgeable, professional and skilled. A special and big thanks to Mr. Naveen Dham, for being with us everytime we felt struggled while implementing any stuffs related to infosec. Hats off.

Strength of Global IS Consulting lies in their team of seasoned professionals led by their CEO who has helped Interglobe in strengthening it’s security posture by conducting regular vulnerability assessment and penetration testing to help us secure our environment.

Thanks to Cybersecurity Team of Global IS Consulting who has been instrumental in protecting us from latest cyber threats through their extensive penetration testing done on our networks and financial webportals. We appreciate the remediation actions implemented by the team to make us compliant to PCI DSS Standard.

Global IS Consulting is one of the most professional and committed consulting organization that we have come across. Helmed by Mr Naveen Dham, the company efficiently and effectively built a Management System based on IS 27001:2013 standard for our organization. The best part was the level of involvement and keen participation in all the activities pertaining to the certification process of the organization.

Thanks to CEO of Global IS Consulting for helping us achieve ISO27001 Certification by indepth implementation and maintaining it for last 5 years in row. Appreciate the professional approach, dedication and massive knowledge carried by the team.

We appreciate the support provided by CEO of Global IS Consulting; Mr. Naveen Dham for helping us achieve ISO 27001 and every year ISMS maintenance provided for real time compliance to ISO 27001 standard

Global IS Consulting is a group of experienced, talented and committed professionals. The CEO of the organization with his team has always shown his best in every project handled by them in the past. He has been instrumental in certifying our client Aircel for ISO 27001:2013 and maintaining it for last 3 years.

CEO of Global IS Consulting, Naveen Dham is very professional in his work. He has an indepth knowledge of ISO 27001, PCI DSS, ISO 20000 and various other IT Standards and is able to quickly adapt the requirements of the standards required with what the client wants to accomplish, resulting in a lot of value addition to the clients. He has a wide variety of implementation scenarios in his background that he can draw information from. We highly recommend Naveen for any ISMS, ITSMS, PCI DSS and cybersecurity consultation projects.

Hats off to CEO of Global IS consulting who has been maintaining our ISO 27001 &amp; ISO 20000 standard maintenance since our inception. Their Cybersecurity experts have been instrumental in protecting us from latest cyber threats through their extensive penetration of our network and patching them in time.

GIS Consulting was incorporated with Mission to Empower Customers, effectively manage their "Digital Assets", to protect, comply and grow the business profitably, in the Data, Network and Application (DNA of every business) protection and management space.

Get in touch with our experts for all your Information Security Needs.